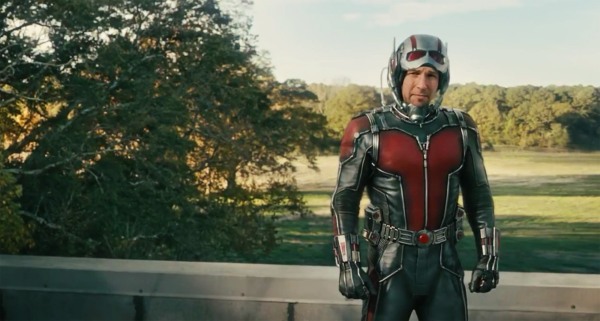 After Marvel’s release of Avengers: Age of Ultron, you can forgive a lot of movie fans that looked at Ant-Man, the movie to kick off Phase Three, as a film that’s easily forgettable or one to be cautious about. Much in the same way as last summer’s Guardians of the Galaxy, the movie turns out to be a surprisingly good one, with Marvel churning out yet another solid, action-packed movie.

You can forgive some fans misconceptions; a film that has been stuck in development for years, to then have its original director and writer walk away from it weeks before production. Not to mention the very idea of a movie about a man who can become the size of an ant making many simply go ‘huh?’

The charming story of Scott Lang (Paul Rudd), a thief who after serving time in jail is simply seeking to become a decent guy to live up to his daughter Cassie’s vision of him, soon finds himself becoming a protégé of sorts to Hank Pym (Michael Douglas) and his daughter Hope (Evangeline Lily) as they attempt to break into their own company in order to stop some of their technology getting into the hands of evil genius Darren Cross (Corey Stoll).

The script is very much structured to introduce filmgoers to this universe, but thanks to where it is placed in the Marvel Canon, it’s allowed to spread its wings, with namedrops of the Avengers, the base we saw at the end of Ultron, and the appearance of The Falcon (Anthony Mackie). This in turn, pushes the movie up so it doesn’t just feel like a Phase One movie. Rudd, Douglas and Lily have a great chemistry and on-screen presence together, but its Michael Peña’s Louis that steals the show; literally every scene he is in has audiences eating out the palm of his hand.

Whilst the character of Scott Lang doesn’t completely capture our hearts like Pratt’s Star Lord in Guardians, it goes as far as it needs for the film to be a success. By the end of the film, moviegoers are looking for the next appearance of Ant-Man, and with the two credit scenes (stay right to the end folks), it very much looks like we won’t be waiting long.

A film that’s proof that you don’t need to be the biggest hero on the block to be a success, and also proof that whatever Marvel touches, will never let you down.